If you’re Pilot with DWI and a suspended driver’s license you need a DWI Specialist who understands pilots and their special circumstances in these types of cases.

As a pilot with thousands of hours of flight Time in fixed wing piston & turbine aircraft and in helicopters, Gary understands both the pressure and the enormous responsibility of being an aircraft pilot, and, what’s at stake when a pilot is arrested for DWI or a driver’s license suspension.

Whether you are a private or commercial pilot, no matter whether you fly airplanes or helicopters, as a Pilot faced with a DWI or a driver’s license suspension, the potential penalties can be life changing. Worse yet, they can be grounding.

The criminal and administrative laws, as well as the Federal Aviation Regulations (FARs), can be complexed and overwhelming to the pilot charged with a DWI or driver’s license suspension. If you are that pilot, you need a DWI Specialist like Gary Trichter to guide you.

Pilots with DWI And a Suspended Driver License

A DWI Specialist knows that if you are convicted of DWI, you must file a pilot’s first-class medical application and report your status within 60 days of the conviction to the FAA as well as to the FAA Security and Hazardous Materials Safety Office (SHMSO) in Oklahoma City, Oklahoma.

In addition, if your driver’s license is suspended because you refused a breath or blood test, you must report the actions taken by the court as a result of your DUI conviction.

You must also report to the FAA Security and Hazardous Materials Safety Office (SHMSO) in Oklahoma City within 60 days if your pilot’s license is suspended through DMV proceedings.

As a pilot with a suspended driver license, if you fail to report your DWI conviction or driver license suspension, you risk further, even sharper penalties.

A DWI to a pilot could mean the end of an aviation career.

As per the Federal Aviation Regulations, under most circumstances, pilots are required to report DWI arrests on their medical applications.

Even a not guilty win must be reported and often requires some type of unnecessary remedial action.

Fortunately, Texas’s Expunction Law provides an exception to the FAA reporting requirement if pilots can wrap themselves in it.

Here, the best way to see if you can avail yourself of Texas Expunction Law is to consult with a DWI Specialist with Aviation experience, and, that would be Gary Trichter.

Let Us Help You Make Your DWI Go Stealth

What do stealth fighters, F117’s, have in common with DWI expunctions?

You can’t see either of them!

From an aviation experience perspective, Gary has multiple Certified Flight Instructor ratings, he is a CFI, CFII (Instrument), and MEI (Multi-Engine) and he provides FAA guidance to pilots charged with DWI, other intoxication offenses, and drivers license suspensions.

In the past he has owned a Beechcraft Bonanza V35, a Beechcraft Baron 55, a Pitts S1T, a Pitts M12, an Espano Aviation Casa Saeta Jet trainer (actually designed by Willie Messerschmitt), a North American T28C (the very first one the U.S. Navy-owned), a Hughes 500 helicopter (the military version and actual Vietnam Veteran, an OH6), and a Cessna 337 (another actual military version and Vietnam Veteran, an O2A).

Gary is a Colonel [member] in the Commemorative Air Force (CAF) and formerly was the aircraft coordinator for the B25 Devil Dog. Gary is an aircraft sponsor for both the B25 “Devil Dog” and B25 “Yellow Rose”.

Gary has litigated cases in over 30 states, in Federal District Courts, and in federal district and Courts of Appeals. He is licensed to practice before the United States Supreme Court and Alaska, Arkansas, Colorado, Texas, and Wyoming.

He has published over 50 legal articles; co-authored a textbook, Texas Drunk Driving Law; and taught defense lawyers, prosecutors, and judges in over 280 legal seminars.

Most important, Gary was the 1st DWI Specialist in the State of Texas.

He understands the impact on a pilot with a suspended driver’s license due to a DWI arrest. 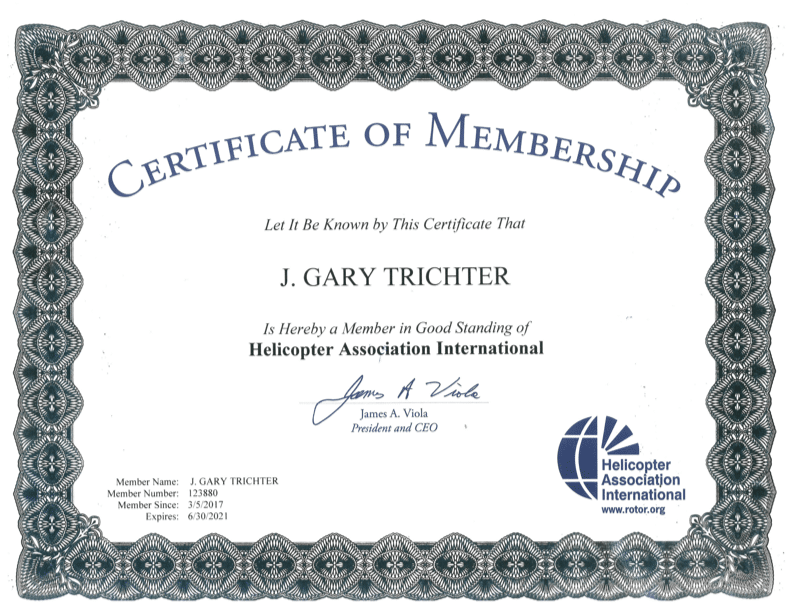 Gary is also an aircraft sponsor on not only the B25 Devil Dog but also the B25 Yellow Rose. As an aside, notwithstanding that no pilot wants to jump out of a perfectly good airplane at 10,000 or 11,000 feet, Gary has four parachute jumps to his credit.

He is a member of the National Business Aviation Association (NBAA), Aircraft Owners and Pilots Association (AOPA), Experimental Aircraft Association (EAA), Commemorative Air Force (CAF) and he has extensive aviation experience as an instructor, an aerobatic performer and a participant in formation flying as well as a performer in numerous CAF military-based air shows.

Gary’s wealth of knowledge combined with his more than 35 years of lawyer experience makes him unique in knowing the pitfalls for pilots associated with having been arrested and/or suffering a driver’s license suspension, especially in DWI/DUI/BWI/FWI-related matters.

Gary Trichter has been flying for almost two decades and has amassed thousands of hours of flight time. He has published several articles including:

Pilots Arrested For DWI: What You Need To Know
Pilots & DWI: Getting Your Wings Back
B25 Adventure
Davis - Monthan USAF Base
Hard-Learned Lessons
Pilots, DWI & The FAA
The Poor Man's P-51
Earning Honorary Naval Aviator Wings

FWI Or Flying While Intoxicated Arrests Are Somewhat Rare, But They Do Happen

The Strict Rules Outlined By The FAA Regulating The Consumption Of Alcohol By Crew Members Of Any Civil Aircraft, Whether Commercial Or Private, Prohibit Anyone From Acting As A Crew Member If He Or She Has Consumed Alcohol Within 8 Hours Of A Flight, While Under The Influence Of Alcohol Or Drugs, Or With A Blood Alcohol Content (BAC) Of .04 Or Greater.

Any Pilot Or Crew Member Who Is Convicted Of Violating Any Of These Provisions Can Face Imprisonment, Fines, And Revocation Of His Or Her Pilot’s License.

As A Pilot, You Operate Under An Implied Consent Law That Is Similar To The Rules Governing Vehicles On The Ground.

This Law Means That If You Are Suspected Of Being Under The Influence Of Alcohol Or Drugs,

You Must Take A Chemical Test When Requested.

If You Refuse The Test, You Could Be Levied A Substantial Fine And Risk Your Pilot’s License Being Suspended Or, Worse, Revoked.

PILOT'S LICENSE AFTER A DWI

DWI And Pilot License Do Not Mix

The Penalties Are Severe And Potentially Career-Ending.

If You Are A Licensed Pilot And You’ve Been Convicted Of DWI, You Must File A Pilot’s First-Class Medical Application And Report Your Status Within 60 Days Of Your Conviction To The FAA As Well As To The Civil Action Security Division In Oklahoma City, Oklahoma.

DWI And Pilot’s License: The Effects

Also, If Your Driver’s License Has Been Suspended Because You Refused The Breath Or Blood Test, You Must Report The Actions Taken By The Court As A Result Of Your DUI Conviction.

Further, If Your Pilot’s License Is Suspended Through DMV Proceedings, You Must Report To The FAA Civil Action Security Division Within 60 Days.

It’s Important That You Report Your DWI Conviction Or Driver’s License Suspension Because Failure To Do So Will Risk Further, Even Sharper Penalties Including Loss Of Your Pilot’s License.

What Pilots Need to Know

In this video DWI Specialist and pilot, Gary Trichter talks about what you should do if you get a DWI as a pilot…

Should you take the field sobriety test or refuse?

Do you have to report a DWI to the FAA?

How long do you have to report a DWI to the FAA?

All this and more in this video.

In this video I want to talk with you about two spectacular laws in Texas dealing with expunctions and record sealing in regard to DWIs.

In this video DWI Specialist and pilot, Gary Trichter talks about Medical applications & expunctions for Pilots with a DWI.

In this video, I want to talk to you pilots about the collateral consequences for pilots who get a DWI.